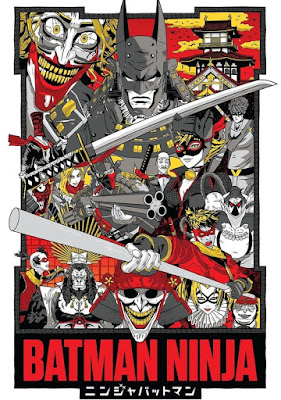 The tale begins at Arkham Asylum where a time machine made by Gorilla Grodd ends up transporting the major villains of Gotham, Batman and his crime-fighting team to ancient Japan.

Batman, last to be enveloped by the time machine, arrives two years later back in time.

The villains have wrecked havoc in the meantime, displaced the original feudal lords, built weapon-heavy super castles and are constantly battling each other for supremacy and dominance.

Batman now has the cliffhanger test in stopping the master criminals from rupturing the past and consequently, the present.

He then has the seemingly impossible task to taking everyone safe and sound, back to the present. 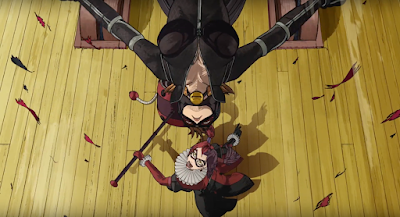 Batman re-imagined
What happens when manga-based illustrators carve their magic to reinvent Batman and his enemies via time-travel in ancient Japan?

You get Batman Ninja, richly illustrated, stylish Batman animation movie that is particularly good and has a lovely, beautifully orchestrated Batman-Joker finale fight that more than makes up for some sluggishness and lack of any major surprises.

That giving up is not even an option for Batman is a lovely emphasis, as is the plot element when, in the absence of modern technology, Batman is left with only his will to overcome his enemies.

The illustrated rich manga texture, bold colours and style, lavishly imagined battle of the castles may not be everybody's plate of Sushi, I loved it though.

The Joker, brilliantly voiced (Wataru Takagi, Japanese version) and drawn is the scene-stealer. 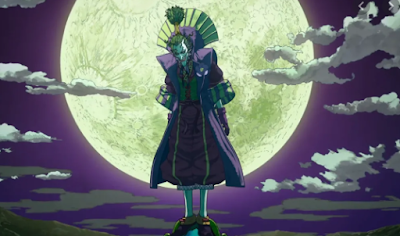 Eternal enemies
Why is the Joker way ahead of the pack in Batman villains? Batman Ninja gave me more reason to wonder on the uncanny Bats-Joker chemistry.

They are a perfect foil, one can sense Batman having empathy for Joker - after all the Joker is deranged and delirious, he may be less at fault as compared to other foul-minded villains.

But the madness and the dash of unpredictability also makes him the most dangerous of the lot.

Batman almost has his face ripped off by a Joker move and yet, Batman holds his ground, avoids killing anyone, and fights clean against all odds. 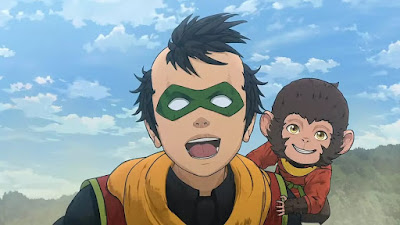 Definitely worth a watch for fans of Gotham's eternal protector. 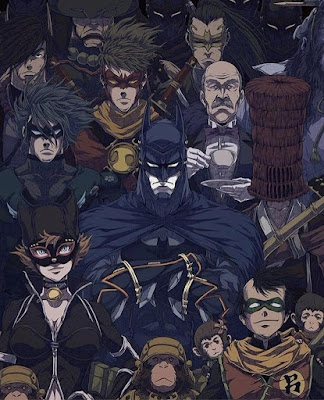 Posted by Snehith Kumbla at 12:05 No comments: 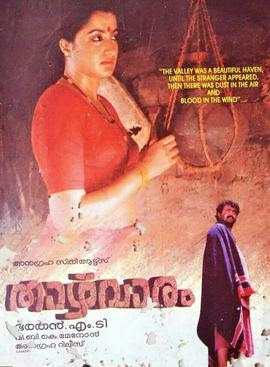 There is a framed black and white photograph of two smiling friends on an indistinct wall. A hand picks up the frame, places it on the ground, picks out the photograph.

Then with a sharp pointed knife, the photograph is cut into two.

In the deadly silence, the photograph is further cut to the size of a profile from the chest up. We are introduced to an untidy, stubble-faced Balan (Mohanlal) looking down gravely at the photo of his childhood friend Raju (Salim Ghouse). 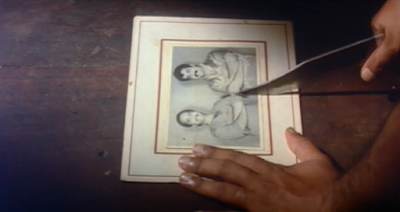 Then with a view of pointed cliffs, beautiful streams and a green landscape, Balan sets out in search of Raju.

What has transpired between the two friends? What is it a weary Balan seeks among Kerala's desolate hills and valleys? 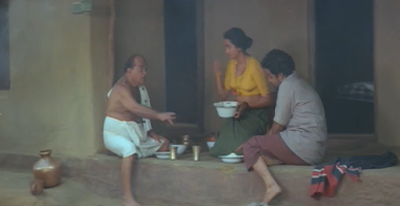 Friends, foes and lovers
Thazhvaram (The Valley) is a Malayalam thriller coloured in shades of Spaghetti Western movies (The Dollar trilogy), nature of an old world tale of deceit, innocence, revenge and greed.

It is also a fascinating study of rural life, human settlements, good and evil, life choices and consequences. 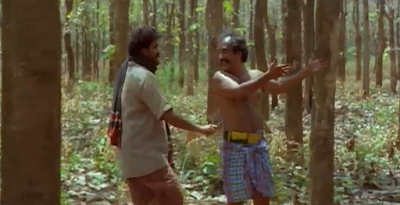 Balan has shades of Clint Eastwood's unnamed character from the Sergio Leone trilogy on the exterior. But as the tale unfolds, we see a simple, naive village man who is undone by the company he keeps.

The extended battle with a former friend is constantly fascinating, as Balan and Raju try to outwit each other, leading to a fiery climax featuring vultures and explosives.

Thazhvaram is also a window to Kerala's enigmatic allure. Mohanlal, the born actor
The Johnson background score is sparsely, effectively used. Silence adds to the suspense and gravity in key scenes.

Mohanlal is extraordinary, and Thazhvaram is further proof of why he is considered among the best actors in the world. 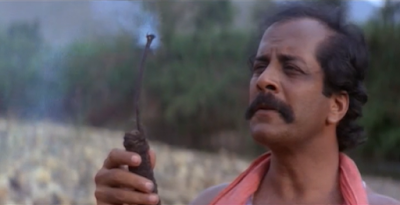 Venu's cinematography is steady, editing cuts by B. Lenin and V.T. Vijayan keep it crisp. Lip-synced songs, though brief, mar the narrative.

Watch Thazhvaram to witness how cinema can exist in minimalism, and consistently engage thanks to sheer film-making passion. 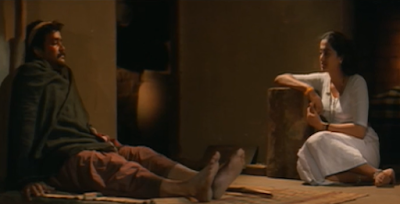 Cinema, down south
The golden age of Malayalam cinema extended from the 1980's to the mid-1990's.

Many of these films are regarded today as iconic, path-breaking and classic.

As a cinema lover, would love to see many early Malayalam classics restored and redistributed to a larger world audience.

The multi-talented Bharathan passed away in 1998, he was only 51.

(Thazhvaram is streaming with English subtitles on Disney + Hotstar (India).) 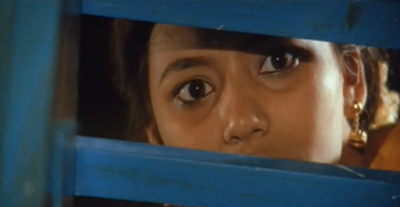 Posted by Snehith Kumbla at 19:56 No comments: 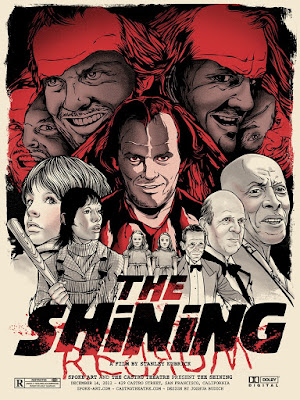 There is a job vacancy at the remotely-located 1909-established Overlook Hotel, Rocky Mountains.

Wanted: A caretaker during the off-season snow-drowned winter months.

For aspiring writer Jack Torrance (Jack Nicholson) the job might offer just the solitude he needs to work, with wife Wendy (Shelley Duvall) and son Danny (Danny Lloyd) for company.

Jack seems to have aced the interview. Manager Stuart Ullman (Barry Nelson) adds just one little detail. The previous caretaker, Charles Grady, got a wee bit restless during his stay. Grady ended up killing his wife and two little daughters in the process. 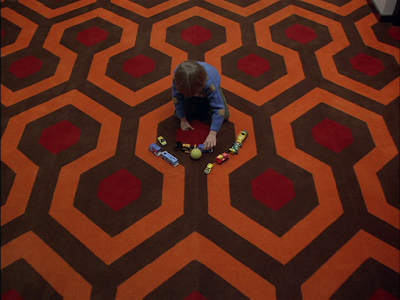 Jack is unaffected and says that his wife loves hearing horror stories. The job is his. Meanwhile, back at Jack's home, Danny has a blood-flowing nightmare about the hotel.

The Torrance family moves in soon after, days began to pass, snow begins to gather and things start to unravel at the good old Overlook Hotel. 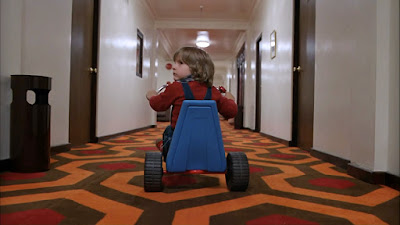 A master at work
Apart from extracting incredible performances from the three main cast members, director Stanley Kubrick literally weaves a maze of visual and audio intricacies to terrify the audience.

The overbearing sense of location, the maze, eye-catching use of geometrical shapes, I can't get my mind off the sublime John Alcott cinematography, the terrific score by Wendy Carlos and Rachel Elkind.

The Shining is a learner's guide to making a timeless horror movie. 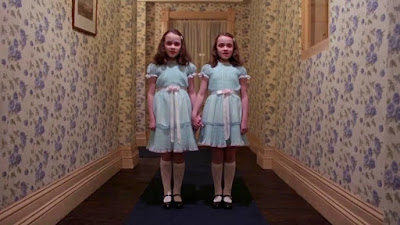 The hypnotic use of enclosed spaces, of movement, sound, colours and textures is unbelievably precise. The wolf and the three pigs story is twisted about for axe-pounding scares.

The strong green paleness of Room 237, shroud white curtains, calculated lighting, lingering tense pace, ominous use of red...how the hell did Kubrick get Danny Lloyd to give such haunting expressions?

Nicholson's highly enjoyable act in the final parts is a prelude to his Joker in Tim Burton's Batman (1989). Shelley Duvall is a great horror movie face, that's how a scared-to-death woman should look. 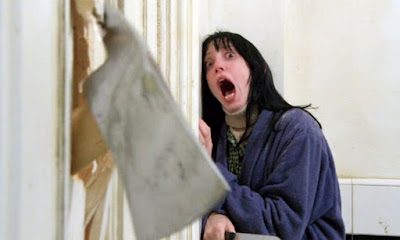 I saw The Shining on my cell phone screen, and its distinct imagery has stayed with me for over two days. I wonder what a late evening big screen experience would have done.

This is a magnificently orchestrated horror masterpiece.

If you love horror movies (otherwise the genre has gone redundant lately), among the clutter of jump scares and cheap tested tricks, The Shining is what Lionel Messi is to football...unspeakable brilliance...something else. 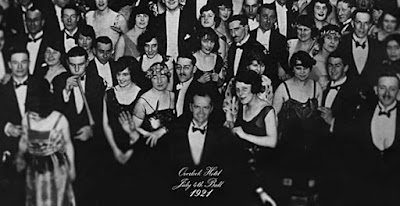 Posted by Snehith Kumbla at 13:00 No comments: