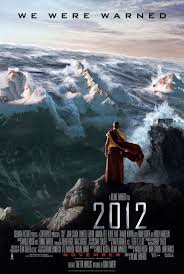 Why do cliche-ridden, consistently mediocre Hollywood disaster movies do so well?

Many of us yearn for a sense of disbelief and an enlarged, impossibly fantastic perspective, in our largely non-incidental lives.

Like, who wouldn't want to die in epic style, with millions of fellow earthlings?

Watch a whole island turn into a mammoth volcano and jump in manic glee?

Do a wide-mouthed eternal scream with the tongue lashing, shivering out, while falling into those mega earthquake cracks?

That's the way to go!

Nobody dies the usual way in a template-ridden, mega-budget, end of the world (yes it's that time of the year again!) Hollywood disaster movie 2012.

Director Roland Emmerich loves bringing the world to the brink of its end, and he does love to watch world famous landmarks crumbling, the earth giving away, and lead characters tottering off the edges but never ever managing to die.

Predictably, the lead characters survive to save the day.

So it is left to the VFX team (hail the visual effects people!) to make it all fun and convincing, even as cities fall apart and everything world-renowned is reduced to rubble.

The loud soundtrack does the rest.

2012 movie review
Don't look for a story, expect emotional pep talk on universal brotherhood, Asian mystic talk (the cup is full and you keep on pouring...blah blah) and have fun.

2012 is a movie to be enjoyed and forgotten, to the unhealthy crunch of tub popcorn and in dreading a fatal asteroid attack, more deadly incurable virus, mayhem, zombies, nuclear war, and other mega end of the world scenarios.