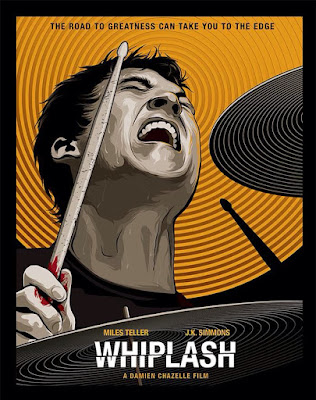 
Terence Fletcher: "Truth is I don't think people ..understood..
what it was I was doing at Shaffer.
I was there to push people beyond what is expected out of them....
I believe that is an absolute necessity...otherwise we are depriving the world of the next Louie Armstrong, next Charlie Parker...I told you that story about how Charlie Parker became Charlie Parker, right?"

Andrew Neiman: "Joe Jones threw a cymbal at his head."

Aspiration meets reality when Andrew is selected as alternate drummer in the Fletcher-headed conservatory band.

Then all hell breaks loose.

Always wanting to be a great drummer and nothing else, a demonic rush to please Fletcher seizes Neiman.

Drumming becomes a sole, life-threatening obsession. Everything else becomes insignificant, even as his love life lies ruptured.


Intense, Fiery
There is no escaping Whiplash's well-directed intensity.

The major storytelling triumph is the minimalist, straight-forward character-driven approach.

The story vein stays with the two main protagonists, both fiery, unyielding, turbulent and riveting.

Fletcher and Neiman are the film's metaphorical wrestlers and bookends.

Beyond the Music
Director Damien Chazelle doesn't use any jazz-based soundtrack for inducing overwhelming emotions from the audience.

Instead, unlike many other music-based movies, he banks on revealing the uneasy, stormy, agitated human spirit.

That demented spirit behind the seemingly tranquil music making.

Top grade performances by Teller and Simmons, a clean screenplay and razor sharp editing (love the ending) makes Whiplash a mini-classic, a must-watch. 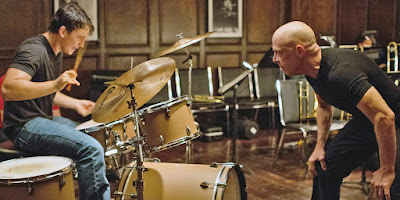